Did I run yesterday? Yes.

See, I could leave it there and have you believe I went for a “proper” run and that I am oh so goody-good-good, running with the wind in my hair at an impressive pace through the park without breaking a sweat. But I was always going to be honest on this blog, plus I can’t stand that shit where people try to present perfect Instalives – it’s not for me. So did I race around the park like the wind? Not so much. I didn’t run like the wind but I ran a LITTLE. Half a kilometre. I know – not much, is it? Three minutes of running. It was at the end of my long walk and I decided I’d run the rest of the way (roughly three kilometres) home. Well. I ran half a kilometre and it was only three minutes but I still RAN, albeit not far or fast. So what. It was so tempting to just keep walking, listening to yet another audiobook – I absolutely adore my walks, they’re my meditation, absolute sunshine for my soul – but I switched to music and RAN. It wasn’t as easy as I thought it’d be so it didn’t turn out to be the rest of the way home, just a measly 500 metres before I decided to go back to walking and switched back to the book and Michael Persbrandt recounting his early days of his acting career in his deep, gravelly voice.

Here he is, by the way – his most famous role is Gunvald in the crime drama Beck, he does “bad cop” to perfection: growly, unreasonable, brutish, very un-PC and a bit of a bull in a china shop – reminds me of my dad, even looks like him (obviously minus the tattoos – Pa Dear does not care for tattoos): 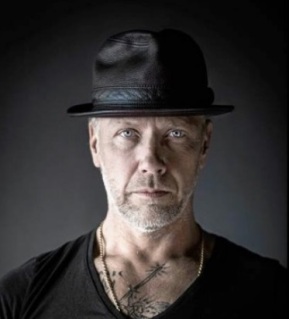 I keep going off on non-drinking topics on this blog, but Persbrandt is actually relevant in that he has a bit of a checkered history with booze (and other substances too) from what I can gather from the book so far. Actually, the part I’ve just recently listened to is where Persbrandt accounts for how the role of Gunvald is basically acting the way he might when he’s drunk – all burly and aggressive and staring anyone and anything down – and quite the opposite to what and who he is sober. He also touches upon how this famous (famous in Sweden anyway) role has completely shaped people’s perception of him, that people think he’s this super masculine alpha male when he is in fact a bit of a softie when it comes down to it and quite the opposite. To be fair, I think if I ever met him in real life I’d be really confused if he wasn’t just like Gunvald, his language peppered with swear words and politically incorrect comments. But all of that aside, it’s interesting for me to read – or listen to, as it were – as it shows yet another side of the story and I don’t specifically mean Persbrandt’s but the story of alcohol. I nearly wrote ‘alcoholism’ but I’ve not so far in the book heard him refer to himself as an alcoholic or addict so I’m not going to label him. Anyway, a very good actor and if he has his shit together these days, all the better.

I don’t have anything interesting to say today so I won’t ramble on. I’m not drinking and I’m happy. I still don’t WANT to drink. Any time drinking does pop into my head I know so well that the image isn’t real – I will never be able to drink like a normal person, I will never be able to have that situation where booze is a bit of glitter you sprinkle on top because I guzzle my way to black-out and it’ll never be any other way. And I’m fine with that. ‘Tis cool. Sure, I wish sometimes I could – of course that’d be nice – but that’s like hubby pining for a kiwi fruit smoothie. He’s allergic to kiwi fruit so it’d make his throat swell up and land him in A&E, so it’s pointless. Same thing for me with alcohol. I react badly to it and it’ll never be different. And that’s OK. It’s more than OK. It’s absolutely fantastic – it’s not like I’m allergic to something that, like fruit for example, is good for me. I’ll take this seemingly unfortunate disposition as a win, come to think of it.

Today I’m not going to drink.

I used to drink a lot of wine. View all posts by annastk76

Join 268 other followers
Follow Storm in a Wine Glass on WordPress.com

My path less traveled. Rediscovering self after surviving the abuse that almost sunk me. Goal of strengthening and thriving on my adult legs. 👣🙏🏻 #recovery #forgiveness

Storm in an Audi

We used to fly but now we don’t.

What heart speaks out

A sobriety blog started in 2019

Do you believe in ghosts?

Are you kidding me?

open your mind to a growth mindset and new perspectives

I am a retired teacher who quit drinking and found happiness! After going deaf, I now have two cochlear implants!

Operation Get A Life

Getting myself sober; the ups and downs

my life without alcohol

The joys, benefits and challenges of living alcohol free

Just a gal trying to get sober

The State Of Being Sober

Margot's Movement. A journey of sobriety and saying no to the Sauvignon. Once, and for all.

From a dark home, To an empty soul, A hurt heart, Makes a writer gold.

Seven Tools for Unleashing Your Creative Self and Transforming Your Life

Reflections of a Sexual Abuse Victim

"Remember Me When You Are In Hell!"

Trying to quit the wine

My not so interesting attempt at sober

The Actions Needed for Mastering Your Motives

Tales of inspiring wave riders. Consciously aware of our world.

Being my own hero one line at a time

The wine witch verses the sober queen
Stumbling Towards Hindsight

Going back is not an option

I used to drink and now I don't

My Life, My Story

Stories and photos from Scotland

How I Gave Up Binge Drinking In 5 Steps

A Writer’s Observations About Life: Figuring it Out as I Go...